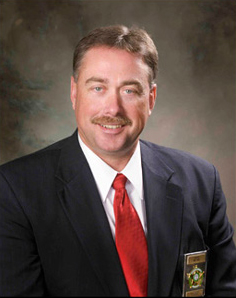 When Mike Neal was elected Rhea County Sheriff in August 2002, he had the vision of modernizing the department, providing all new equipment for the officers and bringing the Rhea County Sheriff’s Department into the 21st century through technology. All this in an effort to provide better service to the community and allowing the officers more information and safety to better serve the community as well.

His accomplishments and achievements while in office have been dramatic and profound. His first act was to completely renovate the current facility that houses the administrative offices making it much more comfortable for the employees and a much more pleasant and welcoming experience for citizens who come to the office for assistance. The officers were outfitted with all new uniforms and equipment, standardizing weapons carried by offices for the first time.

When Sheriff Neal was elected in 2002, there were two computers, one in the Administrative Office and one at the Rhea County Jail. Today, every office in the department is outfitted with a modern computer and all have access to the Internet and email. Information was difficult to obtain in the past, but now, mug shots, most wanted information, missing person and amber alert information, case information and press releases can be shared in a matter of moments.

Understanding the need for a full-time officer dedicated to family violence, Sheriff Neal started the Rhea County Sheriff’s Department Family Violence program with Investigator Rocky Potter working with victims of domestic violence, child abuse, elder abuse, neglect and rape cases. The working relationship between the sheriff’s department, court, judge and domestic violence coalition is outstanding. This program has progressed and Rhea County continues to lead the way in providing assistance to victims through the new Victim Notification System. Victims can have 24-hour notification to status changes for an inmate. This is especially valuable for victims of domestic violence who advance warning of release of the perpetrator can mean peace of mind and safety.

Fiscal responsibility is also a paramount concern for Sheriff Neal. While progress requires investment, the reward should be as great as possible with as little cost to the local citizens as possible. Many local citizens are not aware that much of the equipment provided for the department including A.T.V.’s, Mobile Command Center, Marine Patrol Boats, Special Response Units, as well as other clothing and small gear have been purchased through grant money from the federal government, donated by private citizens, or obtained through the L.E.S.O. Army Surplus Program. Much of the equipment can also be traced to recovered funds from convicted drug offenders.

Sheriff Neal is widely respected in the law enforcement community holding training and certification from local state and federal organizations. He has worked hand in hand with many organizations throughout his career beginning in 1987. Sheriff Neal holds the distinction of being recognized as V.F.W. Officer of the Year 1998, along with several other nominations for this award. He is trained and certified in K-9 operations, D.E.A. and the Drug Interdiction Task Force. Sheriff Neal sits on several law enforcement related boards and is a member of the Tennessee Sheriff’s Association.

Sheriff Neal also is charity oriented and expects the same from his employees. The Rhea County Toy and Coat Drive has grown from less than 200 children assisted in 2003 when Sheriff Neal founded the program, to over 1200 children and countless adults who have been provided assistance with toys as well as a warm coat for the children and adults. The Senior Citizen Awareness Network known commonly as S.C.A.N. is one of only two in the State of Tennessee that provides Rhea County Sheriff’s Department volunteers who regularly check on and assist area Seniors and provide a contact point for aid to which many would otherwise have no access.

Sheriff Mike Neal is humbled and honored to serve the citizens of Rhea County realizing that the Rhea County citizens are his friends and neighbors and the safety and well being of each citizen remains his ultimate goal.